You're offline! But don't worry, you can browse here disconnected.
From the user point of view, the option to log in to a website with a Google account is convenient and standardized. The Google OAuth API is the way to implement it and, while the library is developed in plain JavaScript, it can easily be integrated into your Angular application.

When you want to add some kind of authentication system to your Angular-powered web app, Google OAuth comes in handy because it simplifies all the identity verification process for the developer and makes it a one-click well recognized action for your user.

The OAuth flow is a simple yet powerful one: the user clicks on a "Sign in with Google" button present at your page and is prompted with a form to log into his Google account. When the log-in is done, the form window closes and gives you back the user data and a signed token. And that's all! You can use it to identify your users.

First things first, you have to create a project through the Google API Console to which all log-ins will be associated. Refer to Google for the creation steps. Once created, under the Credentials options, you need to set up an "OAuth 2.0 Client". This will create a Client ID (our key) for you.

An explicit authorization has to be added for every URL under which the app is going to be stored. For testing purposes, whitelisting your local development site should be sufficient. 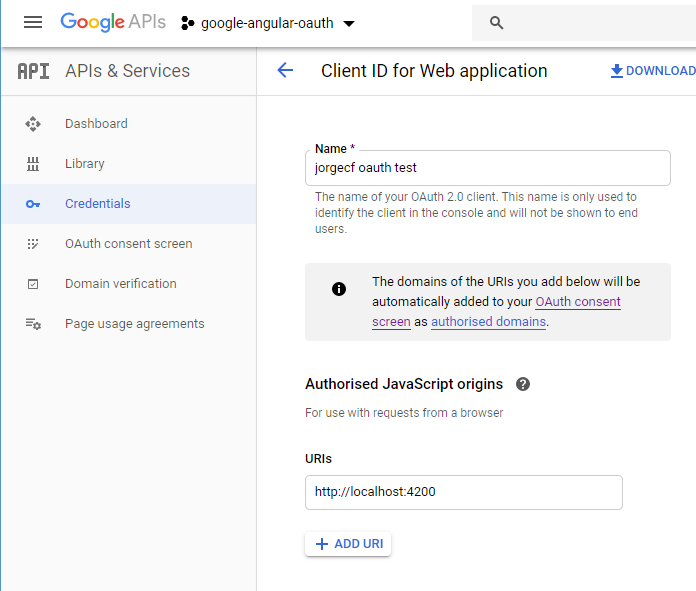 With this credentials, now your app is allowed to communicate to Google.

Get your app ready #

The SDK is developed in plain JavaScript, so in order to make our compiler happy, we have to install the Typescript types provided by the DefinitelyTyped project. Open up a terminal and install them via npm:

By default, you should have the types loaded, since your TS compiler usually looks for them under the node_modules/@types folder, where this particular package is installed. If it's not the case, you can assert it filling the types array:

And a script tag should be placed at your index. This will load the external code.

I'm going to use a simple button for the user to log-in. When this button is clicked, a prompt will ask the user to grant permission to your application. Whether they complete the form or abandon it, we'll catch the result. 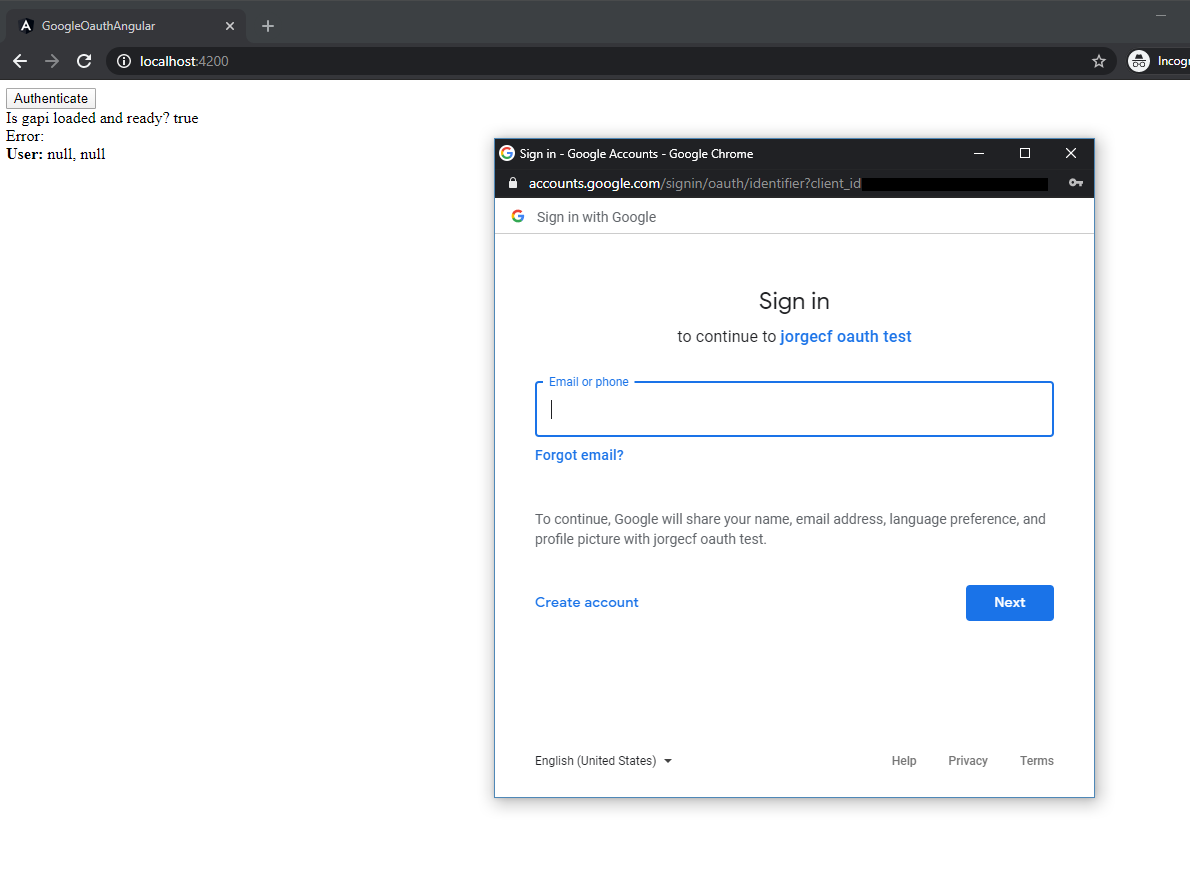 Now, you're ready to add the logic behind it.

Talking to a server is an inherently asynchronous operation.

The gapi relies heavily in callbacks in a way I don't feel really comfortable with, so my personal approach here is wrapping the functions in Promises so they can be called in a more functional way.

For the set up, you will have to load the auth2 library and initialize it with your app key. I wrote this function to be called in a "lazy" way, that means, it's not to be called until authentication happens for the first time.

The second one is the actual authentication method we previously set as the click handler. We await for the prompt result and catch the result with the data or the error.

This would work already, but if you want to keep your user logged in when they come back, you can check if there's one currently stored on your ngOnInit and use it:

After that, the local variable user is filled with the user data, including a unique ID, and can be sent to your server to be stored.

Talk to the server #

Now that you have a way to identify each one of your users uniquely and unequivocally, the logical step forward is to send this info to your backend. Usually, you'd want to store the unique ID in your database system of choice.

It's not a secret that sending this ID plainly to your backend would raise a huge security issue: you have to consider everything that comes from your client insecure by default.

When the user logs in to your site through Google OAuth, the api gives you not only the personal data for the user but a token as well. Simply speaking, this token is generated and signed at Google's side and it states for whom user is valid and to which app, until when is valid amongst some other data. This token is what you will send to your server, and its validation is the way to make sure your application does not get compromised. Google provides the steps needed to validate one of its tokens.

Furthermore, they have already built-in libraries to do the dirty work in some languages. For example, for .NET a GoogleJsonWebSignature.ValidateAsync method is provided. If you inspect the code, you will see how every step is implemented.

I hope you found this little covering interesting. You can check the working example in my GitHub.